St Brigit is one of the best-known saints in Ireland, and regarded by many as being the country’s second patron saint after the official Saint of St Patrick, and in equal rank to the other extremely important saint of St Columba, or Columcille. She certainly had a fascinating life which is well worth exploring. She has been worshipped in different forms for many centuries, pre-dating modern Christianity. From the Imbolc Celtic festivals and links with spring, to her modern associations with the perpetual flame, Brigit’s fascination and resonance lives on.

In pre-Christian times, St Brigit was worshipped by the Celts as being the goddess of fertility and healing. She was celebrated at the Imbolc festival, a Celtic festival which was marked on February 2nd as a welcome to the forthcoming spring. Today, she is associated with the perpetual flame, reflecting her link with fire which was also celebrated at the Celtic festival. As well as being a patron saint, she was also the patroness of poets, smiths and doctors, and her presence was symbolised by a beautiful white swan.

Traditionally, she is known as The Dagda’s daughter, who is the deity of the Tuatha de Danaan. Her festival is now observed on February 1, the former Imbolc festival. The church typically linked modern Christian festivals to ancient folk festivals to continue customs and meaning where saints had long been observed. This is shown by the fact that she was recognised by the Christian church when the Celtic people embraced Christianity. Rather confusingly, she is also sometimes known as Mary of the Gael, translated roughly into our lady of the Irish, or ‘Muire na nGael’ and Ireland’s first nun, referring to the Christian link.

Goddesses such as Brigit are found in many other countries and linked with ancient mythologies. For Brigit, the overseas equivalents would be the Roman goddess, Minerva, and the Greek goddess, Athena. As with these other powerful goddesses, Brigit is a multiple patron saint, of smithcraft, healing and poetry, as well as being recognised as one of the Celtic people’s great and most worshipped mothers. It is interesting to note that in Celtic culture, mother goddesses were especially renowned and worshipped, with other goddesses including Morrigan and Danu.

This differs from Greek mythology, wherein these triple goddess representations were defined by the three stages of the woman’s life on earth; from virginal young maiden to childbearing matron, and on to crone for the final years. In Celtic culture, however, the Saint Brigit’s were all recognised within the same generation, and it was their domains of ownership and responsibility which gave them their distinction.

The love of the trinity

The Irish have always had an affinity with things grouped in threes. The importance of numbers is recognised in many countries across the world where different numbers have different associations. One example would be the Chinese affinity with the number seven, which is associated with good luck. In Ireland, the triads, or trinities come in many guises. One example is the country’s triads, which in contrast with Chinese organised gang culture is actually a form of wisdom, with sayings that take three parts. These ancient mores date right back to the ninth century.

In addition to these sayings, there are three sovereign goddesses, Fodhla, Eriu and Banba. The Irish love of threes was also shared, with the Latin phrase ‘omne trium perfectum’ recognising that things that come in threes are perfect. Of course, in modern Christianity this is observed with the holy trinity of God the Father, God the Son, and God the Holy Spirit. Interestingly too, the love of three is found in modern writing practices wherein there is a defined rule of three. Knowing this makes it easier to appreciate why Celtic and modern Irish culture has three Brigid goddesses.

Looking at the three Brigid goddesses

In a family context, Saint Brigid was the first daughter of Dagda, the great Irish god. She was followed by two sisters who shared her name. Together, they became known as the three sisters, the three mothers, or collectively, the Goddess Brigid. Taking each in turn:

The ‘fire of the hearth’ Brigid is the goddess of the home and responsible for family, fertility, healing and childbirth.

The Brigid most like the Greek Goddess Athena is the ‘fire of the forge’, and also a patroness of crafts that include metalsmithing, weaving and embroidery. As if she didn’t have enough to do, she is also the goddess responsible for law, order and justice.

The final Brigid is the muse and known as the ‘fire of inspiration’. She is the muse of song history, poetry and the nominated protector of all types of culture and learning.

The sacred flame or perpetual flame link is a theme commonly found in Irish culture and history. Legend has it that when Brigid was born, she had a huge tower of flame that extended from the top of her head, directly to the heavens above. Her birth was also particularly auspicious, as she was born at sunrise and her family’s house was said to have appeared to have been shrouded in a glorious flame as the sun rose. This detail is generally acknowledged to have been a later embellishment added to the deity’s legend. It occurs partially from a fusion of earlier legends, which saw stories from Athena and Brigid merge, saying that the former sprung completely grown from her father’s forehead.

Her life and times

Born in approximately 451 AD, she lived until c. 525 AD. Her mother was actually a slave girl called Broicsech. Brigid’s birth was actually foretold, saying that the girl would be special and born neither within the family home nor in the outdoors. She was actually born on the door’s threshold after her mother slipped whilst walking through it. Because her mother was a slave, the infant Brigid was also born a slave. Her mother was later sold to a Connaught chieftain, and her daughter was sent away to be educated and raised by the Druids. Records say that the young girl grew up to be very beautiful, and she was renowned for being highly generous in character. One story has her giving her Father’s jewelled scabbard away to a beggar because she had no other money or items to give. In fact, her father was said to be angry at her desire to live a life helping others as a Christian convert. However, he conceded eventually after the jewelled knife incident, which some say was received by a leper.

She is also associated with miracles. After routinely giving away cheese and milk to the poor from her own dairy, it was miraculously always returned to her. Other legends say that she once hung her clock on a miraculous sunbeam, and that she explained the concept of salvation by crafting a cross from rushes when speaking to a dying pagan.

The legend about the strangely shaped rush cross is an enduring one, and children in Ireland still traditionally weave these crosses on her feast day, on 1st February. In some parts of the country, the family’s oldest daughter will take on the part of the saint and knock on a door, inviting those inside to get onto their knees, pay homage and let the blessed Brigid enter the household. The traditional response was always to welcome the girl in and say that she – and the goddess – were welcome one hundred times over. This is sometimes observed in Scotland too and in both countries people in some parts will still hang small cloth strips onto trees and bushes on the eve of the feast day in the hope that the saint will pass over and leave her blessings. These crosses can, today, be bought in shops and via importers and are still very popular with Irish people overseas. In addition to being made from rushes, they may also be made from reeds and sometimes even pipe cleaners and other decorative elements. Some will bear an image of the saint and will be used to assist with worship or may form part of a shrine within the home.

Although both the perpetual flame of St Brigit and the patron saint of Ireland remain entrenched in the country’s culture, the prevalent view assumes that her Imbolc feast day and Celtic spring rite roots mean that the original Celtic goddess of Brigid was simply Christianised as the modern day St Bridget. However, some scholars challenge this, and there are arguments set out in historical papers that put forward interesting evidence. For those wishing to find out more, a good resource is: Pagan Imagery in the Early Lives of Brigit: A Transformation from Goddess to Saint? Author: Lisa Lawrence. 1996-7, held in the Harvard Library: http://www.jstor.org/stable/20557314

The celebration day of patron saint, St Brigit, the perpetual flame, is on February 1st – the former Imbolc festival that heralds the coming of spring. The day is a cross-quarter day, which measures its half way point between the equinox and the solstice; an important day in the Celtic calendar. Today, the name of the Goddess turned Christian saint is extremely popular in Ireland as a girl’s name, and has myriad variants which include Bridget, Brigit, Breege, Brid, Bridie, Breegeen, Bridin and other forms. 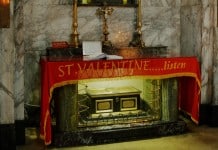