He is a man remembered more for his appallingly cruel behaviour towards his tenants during the Great Famine than for his extravagant taste in property.

The plans for his grand folly were largely inspired by his brother’s impressive property – Strancally Castle.

He left Ireland for a time to fight in the Napoleonic Wars, and on his return he built a relatively modest house in the grounds of his Ballysaggartmore estate.

However, at some point in the 1830s, he decided that the house was not grand enough for his needs or reputation, certainly not when compared with Strancally Castle.

As such he started to make plans to build a far more imposing property/folly.

It is said that these plans were largely driven by his wife, Elizabeth, who coveted a residence as grand as that of her brother-in-law.

She was determined that their branch of the family would be seen to live as grandly as their near relatives.

Work started with the construction of the ornate and ostentatious carriageway, with equally grand gate lodge complete with huge gates and towers.

Once the lodge and bridge were complete, the couple turned their attention to ‘improving’ the estate.

This largely seemed to involve clearing the land of the sitting tenants and many of their utilitarian cottages.

The Beginning of the End

It was at this point that the Kiely-Ussher’s ambitious plans started to unravel.

They quickly ran out of money, and it rapidly became clear that their dream of living in the grandest house in all Waterford was just that – a dream.

Thwarted in their ambition, the couple were forced to live in the existing dwelling.

We can only imagine how despairing and humiliated they must have felt at the realization that the impressive carriageway and gate house they had built would never lead to the mansion that they dreamt of.

This monetary crisis coincided with the onset of the Great Hunger.

This terrible Famine was without doubt one of the most devastating events in Irish history.

Like so much of the country, the population in Waterford dropped by more than fifty percent between the years 1841-51.

Looked at in the context of these terrible times, the profligate plans of the Keilly-Usshers seem almost unbelievably crass and divisive.

As the decade progressed, the few remaining tenants on the estate were not only slowly starving, they were also in no position to pay their rent.

In direct contrast to many of his fellow landlords Arthur Kiely refused to either suspend or reduce the rent payments.

Rather he used non-payment to justify evicting the occupants and demolish their homes.

He used the resulting freed-up land to raise livestock, which gave him a better return than his human tenants.

In 1847 the Cork Examiner ran a story about conditions on the estate. It did not make for pleasant reading.

The reporter found houses that had been levelled, others without roofs and doors.

Groups of starving women and children huddled amid the ruins, seeking shelter from the elements.

Many had sold all their worldly possessions in order to live, including their clothes and even bed clothes.

These were truly desperate people.

Conversely, over at Strancally castle, Arthur’s brother John was very concerned with the predicament of his tenants, treating them kindly and with great compassion.

Arthur’s utter indifference to his tenant’s predicament led to an outpouring of resentment among the wronged tenants.

This peaked when a group of them tried (and failed) to assassinate Kiely-Ussher.

The participants in the plot were sentenced to transportation (to Tasmania) in 1849.

As the worst of the famine started to pass, the country as a whole started to get back on its feet.

The same cannot be said for the Kiely-Usshers; some would say that karma finally got them.

Their fortunes stayed on a downward trajectory, not least because with no tenants left on their land, they had no income to speak of.

By 1854 the estate was on the market, but a new owner could not be found.

Perhaps potential purchasers were deterred by the recent shameful history of the place.

In 1861, a buyer was finally found and one William Morton Woodroofe became the new owner of the estate.

The following year saw the death of Arthur Kiely-Ussher.

The Woodroofe family lived on the estate up until the turn of the century.

The property was then bought by the Honorable Claud Anson, who had been working as a rancher in America.

On his marriage to the Irish Lady Clodagh de la Poer Beresford, the couple decided to settle in her homeland.

However, their Irish dream did not last long, as the house burned down in 1922.

Even had that not been the case, it seems that the Anson’s were as reckless with their money as the Kiley-Ussher’s had been.

Claud had rashly invested the bulk of their funds on Russian bonds that failed in the aftermath of the Revolution.

The house and folly then stood near derelict and unoccupied for years, until it was eventually demolished.

The front lodges, though, remained tenanted until sometime in the 1970s, though they too were ultimately abandoned.

Today, the Ballysaggartmore Estate and folly functions as a public park, with pretty walkways that wind through the woods.

All that is left of Arthur Keily-Ussher’s extravagant plans is the gate house and towers.

They serve as a timely physical warning against greed and foolish ambition, so starkly highlighted during the terrible famine years.

The Ogham Stones in Seskinan Church and nearby Stone Row 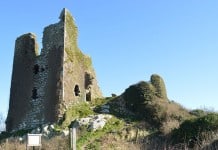