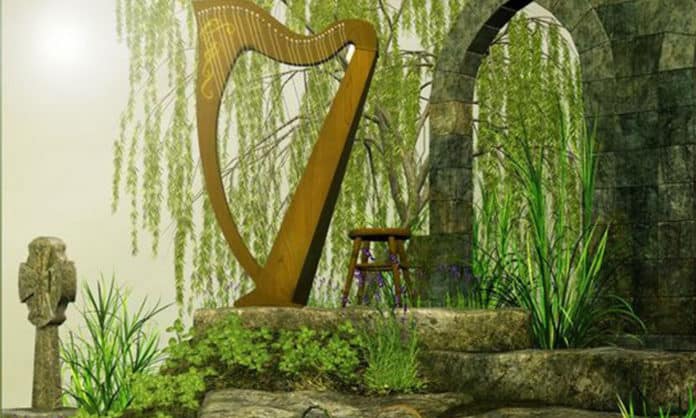 Dagda’s Harp is a well known story in Irish legend of the renowned warrior named Dagda and his Magic Harp.

He was the chieftain and high priest of the golden-haired, blue-eyed people, the Tuatha dé Danaan, who came to Ireland from the North and used heavy spears in battle.

They were supernatural beings and the Dagda himself owned many magical items, such as a club that could kill 9 men with 1 blow and return life with its handle, and a bottomless cauldron, the Undry, that never left any man unsatisfied.

His most prized magical possession, however, was his Magic Harp.

The Magic Harp was called the Uaithne, or the Four-Angled Music. 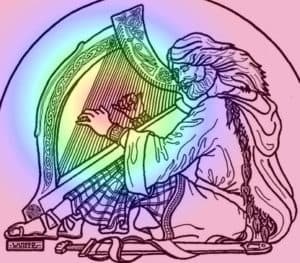 The music of Dagda’s Harp was known to change the seasons and also to change the emotions of men, women and children in many ways.

The Dagda played the harp for his men when they were about to go into battle to make them forget their fear and think only of defeating their enemies.

On returning from battle he would play the harp to make them forget their wounds and sadness over lost comrades and think only of the glory of winning.

When the Tuatha dé Danaan came to Ireland they began to fight with the Fomorian people who already inhabited the island.

The Fomorians had dark hair, dark eyes and carried spears of golden-bronze into battle.

On hearing of Dagda’s harp, the Fomorians believed that taking possession of this harp was the best way to defeat the Tuatha dé Danaan.

So when the two tribes were at war and the Dagda’s home was unguarded, a number of Fomorian chieftains entered his home and stole the Magic Harp from the wall.

Then, taking their wives and children they fled as far as they could, confident that the Fomorian army could now defeat the Tuatha dé Danaan.

They found an abandoned castle to take refuge in and hung the stolen harp upon the wall of the banquet hall.

Searching for the Harp

However, the Tuatha dé Danaan defeated the Fomorian army and on discovering the missing harp, groups of men were sent far and wide to find it.

The Dagda and his men eventually discovered the abandoned castle and burst into the banquet hall.

The Fomorians leapt up and placed themselves between the Dagda and the harp, determined to defend their prize.

Yet all the Dagda had to do was to call out for his harp and on recognizing its master’s voice, the harp sprung from the wall and flew into his outstretched arms.

As the Fomorians, who greatly outnumbered the Dagda and his men, began to approach with their weapons, the Dagda began to play his Magic Harp. 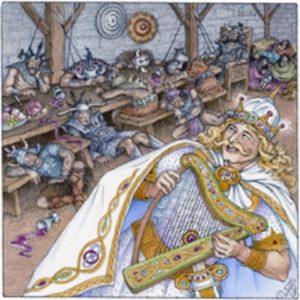 He first played the music of tears, making the Fomorian women and children sob and the men hide their faces in their cloaks to shield their sorrow.

He then played the music of mirth, making the Fomorians laugh so hard that they dropped their weapons and had no strength left in their bodies.

He finally played the music of sleep, a soft, beautiful tune sending all the Fomorian families into a deep sleep in each other’s arms.

Once the Dagda was sure that all the Fomorians were deeply asleep he and his men crept away and returned to their homes.

Thus, with the help of Dagda’s Harp, the Tuatha dé Danaan were able to defeat the Fomorians once and for all.