The tenor banjo is a relative newcomer to the world of Irish traditional music, being around one hundred years old.

Indeed, up until as recently as the 1960s they barely featured at all in the genre.

Today, however, a tenor version is a pivotal part of any good Irish folk band, and here we explore the fascinating and at times unpalatable history of this most interesting instrument.

The banjo falls into the category of ‘folk lute’ – that is, it is an instrument with a sound box that is drum-like.

Others of the type are the Japanese shamisen and the Persian tar, to name but two examples.

The origin of the Irish traditional music instrument as we know it today can be traced back to the southern states of America.

The imported slaves made the instruments based on memories of the ones played in their African homelands.

The earliest versions often had a sound box crafted from a dried-out gourd with the end cut off, an animal skin drumhead and a fretless neck.

Strings were made of tough fibrous materials, including gut, hemp, thread, or even plaited horse hair.

Unlike the lutes from Africa, though, these early American incarnations, the ancestors of the Irish tenor banjo, were tuned with pegs similar to those found on a violin. 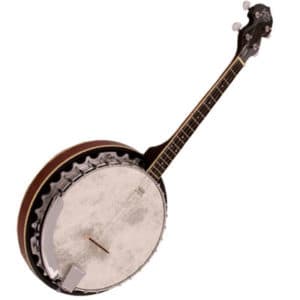 A classic banjo has a short, high-pitched chanterelle (string) that ends at a peg located on the side of the neck, plus a number of strings of full length.

The higher string is the one nearest to the thumb of the player, and this string is struck continuously during play.

In the older styles, the other strings are played with the middle or index finger using a downward action.

The high thumb string and the downward playing action both originated in traditional African music.

On contemporary instruments, the short ‘drone’ string is the final of five strings, though those dating from the eighteenth century had just three long strings plus the chanterelle.

Before the onset of the Civil War in America, the banjo was seen as a quintessentially African-American musical instrument.

However, by the latter half of the nineteenth century, the majority of black musicians had cast it aside in favour of the guitar.

Another reason for its decline in popularity was the unpleasant fact that the banjo had become closely associated with the shocking racial stereotypes perpetrated by the players in black-face who performed in the popular minstrel shows at that time.

As shocking as it seems now, this type of ‘entertainment’ was wildly popular in both America and elsewhere in the world for more than a hundred years.

Minstrels fused classic African rhythms with forms of music from Europe, the result of which was pivotal to the development of American-style popular music.

The instrument we know today was undoubtedly modified from the African-American blueprint by the minstrels.

Virginian Joe Sweeney was the highest-profile minstrel performer, and his popularity contributed to the rise of the instrument, inspiring 1850s instrument designers to work on a five-string version.

Development of the Banjo in Traditional Irish Music

Over in Ireland the instrument was not embraced as part of the traditional music canon until the mid-twentieth century.

Before then, the instrument lurked on the periphery, being played by music hall performers and itinerant musicians.

The banjo that ultimately came to be synonymous with Irish musicians was not the version with five strings (as favoured by the minstrels and hillbillys) but was a four-stringed tenor design.

The dance halls of Ireland and those across the Atlantic in New York and beyond were the starting point for the traditional tenor instrument we know today.

The bands that played for the dancers were required to perform both Irish and American music, so they often added a tenor player to the line-up.

Dance bands in England copied the US groups, and their use inevitably spread to Ireland too.

Most of the Irish tenor players in those days were happy to simply to strum the instrument in a guitar-like style.

As the 1920s dawned, more Irish players started to pick out the reel, jig and hornpipe melodies, embellished with ornaments of several types.

In those days, the most significant player was Mike Flanagan (of Flanagan Brothers fame) who laid down multiple recordings alongside his brothers Louis (harp) and Joe (accordion).

Their records were bestsellers on both sides of the Atlantic, and Flanagan’s instinctively brilliant playing inspired many Irish-based musicians to take the instrument.

The growing appeal of the tenor instrument was in large part connected to its volume. Like the accordion, it was loud enough to cut through the dance-hall din in the period before amplification became commonplace.

The popularity of Ceili bands reached its zenith in the 1940s and 1950s, followed by those who played more versatile mixes of country music and American pop-style tunes.

By the 1960s, the main focus of traditional music had shifted to the pubs, but because of its strident tone, the instrument was equally at home in noisy pub sessions.

The instrument received another boost during the folk and Irish traditional music revival in America, at which time the huge popularity of Tommy Makem and the Clancy Brothers led to a wave of ballad-style groups in Ireland.

The four-string tenor had a vocal advocate in The Dubliners’ player Barney McKenna.

This was the group that forged the practice of fusing vocals (guitar-backed) with traditional reels and jigs.

McKenna is without doubt the most seminal Irish player of recent years.

With just a few exceptions, the majority of tenor players in Ireland today have followed in his footsteps by tuning their instruments to GDAE – one full octave below the mandolin or fiddle.

While this leads to a tone that is less bright than the typical CGDA tuning, the way that Barney calibrated his instrument made it far easier to play traditional dance music in the keys favoured by flautists, fiddlers and pipers.

As the traditional Irish music revival continued into the 1970s, the tenor banjo was utilised more and more by instrumentalists, with many guitarists discovering how well their picking ability translated to it.

A small minority of pedantic purists who disdain the tenor banjo as an overly noisy interloper into the Irish traditional music scene. Saying that, most contemporary musicians see it as an essential element of any folk band. 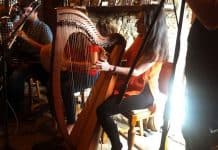