One of the medieval city of Kilkenny’s most notable landmarks is the Tholsel – the ancient town hall that is located in the beating heart of the commercial district, making a significant architectural contribution to the unique character of this ancient place.

‘Tholsel’ derives from two distinct medieval English words: ‘toll’, meaning ‘tax’, and ‘sael’, meaning ‘hall’. The original structure in Kilkenny was built around the year 400, when the city first came to prominence as a fine walled city. The building we see today started life in 1759, though it has been extensively renovated in the intervening years. The stunning façade was extended by William Colles, a local alderman in 1761, and it underwent a programme of restoration as recently as 1949.

The building has over the years also been used variously as a Courthouse, a Guildhall and a Customs House. Today it functions as the City Hall and, indeed, is often referred to by locals by that name.

Notable Features of The Tholsel

One notable feature of this impressive building is the arcade with its five wonderful arches. Historically it was used as a meeting place; today that tradition continues, as it is often graced by informal gatherings, including buskers or carol singers. The space is also utilised as an exhibition area during the city’s yearly Arts Week, and during the festive season it is home to a traditional nativity scene.

Other key attributes include the octagonal clock tower that rises from the slate roof with its eye-catching copper cladding and distinctive chime, plus of course the viewing platform from where, on a clear day, the views across the local landscape are simply stunning. The town’s coat of arms is represented by relief sculpture on the south side of the building.

Recent research has thrown up some debate as to the true date of the building’s construction. A plaque in the arcade states the date as 1759. However, there is now some evidence that the building could actually pre-date this by an astonishing two hundred years. This new theory is based on the discovery in the basement of a pen-and-ink sketch dated 1699 that appears to depict the unmistakable line of the Thosel’s roofline in the background. This is an anomaly, as the accepted history of the area tells us that it was not built until at least sixty years after the artist made his drawing. Of course, it is possible that the building that stands now was designed as a replica of an earlier building, or it could be that it really is a lot older than assumed. For now, though, the jury is firmly out.

There have been a number of key events associated with the building over the centuries. It is rumoured that it was the grisly setting for the execution of Petronella de Meath, who holds the awful distinction of being the first woman in Ireland to be burnt at the stake. Petronella was a handmaiden to Dame Kyteler, herself accused of witchcraft and pursued for her alleged crimes. While Alice used her excellent contacts to escape from armed custody and flee to England, poor Petronella was not so lucky. To appease the bloodthirsty mob that had congregated around the enormous bonfire that had been set directly in front of the building, it was decided that, in the absence of Alice, Petronella would be burnt alive in her place. The maid, traumatized by the beatings she had already endured, confessed to anything and everything the townsfolk saw fit to accuse her of. Though she repeatedly begged for her life, the crowd, frenzied by now, showed her no mercy. She went to her death screaming in vain for her mistress to save her.

More recently, the Tholsel was lucky to escape being burnt to the ground when a fire took hold on September 20th, 1985. Fortuitously, the fire was discovered early on by the Town Sergeant, who, as luck would have it, as also a fireman. He alerted the emergency services and took all the priceless 17th-century city charters to a place of safety. But for his quick thinking, the city could have suffered an incalculable loss of medieval evidence. As it was, no fewer than six Kilkenny fire engines and thirty-five fire fighters were required to subdue the fire. Fire seems to be a recurring motif in the history of the building, though this one was a far cry from the deliberate fire that killed Petronella de Meath as she wept for her mistress Alice Kyteler.

Following the fire, the Tholsel in Kilkenny underwent a significant period of renovation. Great care was paid to safeguarding the historic and architectural integrity of the original medieval structure, thus ensuring that the building retained its great character and distinctive atmosphere. When visiting, it is still easy to imagine that you can hear the jeering of the mob that sent Petronella de Meath to meet her maker in the absence of Alice Kyteler. 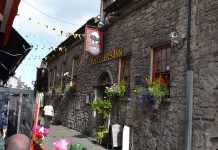 Woman or Witch? The History of Kyteler’s Inn