Dame Alice Kyteler was a glamorous and beautiful woman who was also one of the first in Ireland to be sentenced to be burned at the stake for heresy (charges of being a witch and practising witchcraft did not yet exist).

For more than seven centuries, her fascinating story has intrigued historians and tourists alike.

Untangling Medieval myth from fact is an almost impossible task now, but what is certain is the fact that her story unfolds in the most captivating, scandalous and ultimately tragic way imaginable.

The hunting of so-called ‘witches’ was commonplace in Europe during Medieval times. Around one hundred thousand men and women were executed for witchcraft during this period.

Ireland was an anomaly in that elements of the old Celtic faith remained entwined with the newer Christian religion in many areas, so witch hunts were highly unusual.

The accusation of heresy levelled at Dame Alice sent shockwaves right across the country.

Dame Alice Kyteler was born into a wealthy Kilkenny family in the late thirteenth century.

Her father worked as a banker, and Alice apparently inherited his financial acumen, prospering in her own right as a money lender – a highly unusual path for a woman at that time.

The first of Alice’s four husbands was a local Kilkenny man by the name of William Outlawe.

He too was a banker, and some twenty years older than his young bride when they wed in the year 1299.

The couple and their son, William Junior, resided in a gorgeous house right in the centre of town.

Such overt prosperity coupled with Dame Alice’s striking beauty combined to make her the target of some jealousy among certain fellow inhabitants of the town.

Not long after baby William was born, Alice decided to extend her already impressively large house, and she opened the new addition as an inn.

The inn quickly became popular among wealthy local men, who were said to vie for Alice’s attention.

Legend tells that she was presented with jewels and money by her many admirers, and she quickly appointed a number of attractive women to help her run the inn.

When, just three years after he married Alice, William Outlawe mysteriously died very suddenly, the rumour mill at once flew into gear, with Alice accused of his murder with the help of Adam le Blund, her soon-to-be second husband.

A few short years later and le Blund was also dead, apparently as a result of drinking to excess.

Both husbands had wills leaving Alice everything, a fact that local gossips found to be suspiciously convenient.

Husband number three was a well-to-do landowner named Richard de Valle, who also met an untimely end soon after his marriage to Alice.

He had also bequeathed all his worldly goods to his wife, meaning that she was now one of the richest inhabitants of Kilkenny.

If the gossips were to be believed, she was also a wicked mass-murderer.

The still youthful Alice married for a fourth time, this time to Sir John le Poer, one of her most attentive customers at the inn.

Sir John was both wealthy and well connected – his brother was the local Seneschal.

Tongues wagged furiously at Alice’s ability to outlive every man that she married, and that fact, as well as her increasing wealth, made her the target of some increasingly vicious gossip.

William Outlawe Junior, Alice’s son, was now running the family money-lending business, and many local people owed money to both son and mother.

Then, in 1324, history appeared to be repeating itself.

Sir John started to experience some worrying symptoms, losing both his nails and hair.

His children were desperately worried about their father’s health, and also about the fact that he was considering re-writing his will in Alice’s favour, essentially cutting them out.

Eventually, they managed to convince the at first sceptical Sir John that Alice was trying to kill him.

Legend tells that Sir John searched Alice’s room looking for evidence of her nefarious plan, and when he did so he found a number of hidden suspicious powders, potions and phials.

He and his children then took their complaints to the Bishop of Ossory, Richard Ledrede, accusing Alice of attempted murder and also of consorting with devils.

The Bishop had long been looking to get a proper footing in Kilkenny.

Being English, he had been experiencing difficulties with locals, in particular the aforementioned Seneshal – Arnold, Alice’s brother-in-law.

The Bishop swiftly made things official, accusing her both of heresy and of being the head of a coven of witches.

Alice, her female employees and also her son William were indicted on a number of charges. These included offering animals as a sacrifice to a demon and concocting magical potions made of all manner of insalubrious ingredients in the skull of a thief.

It was also alleged that Alice had had sex with a demon named Art, who sometimes manifested as a large black dog.

If Alice’s great wealth and high standing had attracted the gossip that now condemned her, these same factors also served to protect her from the Bishop’s concerted efforts to put her behind bars.

When the Bishop appealed to the Chancellor of Ireland to put Alice under arrest for her alleged transgressions, he did not realise that this important figure was in fact the brother of Alice’s first husband.

In addition, a number of Kilkenny’s most powerful citizens had a meeting with the Bishop, asking him to drop the charges against Alice.

When he refused to do so, he found himself imprisoned in the local jail for two weeks, the better to re-think his position.

When he was eventually released, he was so incensed by his treatment that he became obsessed with getting Alice convicted and punished for her so-called crimes.

The Bishop had a convenient ally in the Lord Chief Justice, John Darcy, who was furious when he discovered how events had transpired.

The Bishop succeeded in having Alice excommunicated, but she immediately appealed to parliament, stating that the ecclesiastical court did not have any jurisdiction.

Essentially, this was now a battle between state and church, as secular law covered charges of sorcery – not those of the church.

Alice also innocently pointed out that in Ireland, the Island of the Saints, there could not possibly be any witches.

After several months of confusion, Alice’s right-hand woman, Petronella de Meath, was whipped into confessing to witchcraft, a confession that inevitably implicated her mistress.

Among Petronella’s confessions, she said that Alice increased her son’s wealth through enchantment, and that William himself wore a girdle belonging to the devil.

Petronella also told how Alice flew through the night on a magic broom, and that Alice had passed all her magical knowledge to her.

Petronella’s confession seemed to signify the end of the road for Alice.

She was sentenced to the Medieval punishment of being whipped through the streets of the town, dragged after a horse and cart and thence to be burned at the stake.

Alice was not so easily cowed, though. Again she used her not inconsiderable influence, managing to escape the Bishop with help from Roger Outlawe, her brother-in-law.

The men that guarded her were beaten to a pulp, and Alice fled from Kilkenny Castle, where she had been imprisoned in the dungeons.

It is said that she managed to get to England, where she lived under an assumed identity to a great age.

Enraged at having his efforts foiled yet again, the Bishop ordered that Alice be tried in absentia. She was found guilty and her property was promptly confiscated.

The hapless Petronella, though, suffered a far worse fate.

She was burned at the stake on the 3rd of November, 1324, the first person to suffer this dreadful method of execution in Ireland’s history.

William, Alice’s son, got off far more lightly, being sentenced to attending three masses a day for one year and also to feed the poor.

There are many unanswered questions in the strange case of Dame Alice Kyteler.

Was she as innocent as she claimed?

Was it just coincidence that three of her four husbands died in unexpected circumstances?

Was it jealousy that led to her being accused of heresy (essentially of being a witch and of practising witchcraft)?

And is her former home really haunted, and if so, by whom?

Today, the Kyteler’s Inn Kilkenny is a wonderful place to visit for great craic, wonderful local food and ales and some fantastic traditional Irish music.

The ghosts of the past have not entirely been eradicated, though.

It is said that the site of the inn is haunted by the figure of a woman (or maybe a witch) thought to be either Alice or the tragic Petronella, who is unable to rest after being tortured into confessions of heresy and witchcraft. 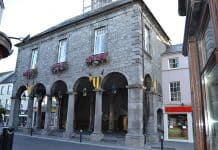 Ancient Gem: The Tholsel Through the Ages