Home Travel & Living What is the Irish Currency – Euros, Pounds and How to Spend

What is the Irish Currency? One potentially mystifying aspect for visitors to Ireland is confusion over which currency to use.

Although Ireland is one island, it is politically separated into Northern Ireland, which is the smaller section to the north, and the Republic of Ireland, which makes up the bulk of the rest of the land.

What is the Irish Currency?

So what money is used in Ireland? Well, there are two main currencies accepted: the Euro and Pounds Sterling/British Pounds.

If you are visiting from the America you will need to exchange US Dollars for Euros.

Other EU countries share the same currency – Euros. The exception for this is the UK which use the British Pound (Northern Ireland is part of the UK).

Does Ireland use the Euro? Yes, in the Republic. So if you’re visiting Dublin the currency that you need is the Euro.

The Irish Republic was one of the first-wave countries to adopt the single European currency on 1 January 1999, resulting in the phasing out of Irish punts.

All the banknotes issued by the EU have the same specific design for each denomination. In contrast each country has its own design of coin, with a specific European design on one side and a national symbol on the other.

The coins issued in Ireland feature a Celtic harp as their special symbol; however, all Euro coins are valid in Ireland regardless of which country they were issued in.

What is the Northern Ireland Currency?

Northern Ireland is part of the United Kingdom and the currency here is the Pounds Sterling. One pound sterling (£) is divided into 100 pence (p).

So if you are visiting Belfast, then you need Pounds Sterling.

Near the border between Northern Ireland and the Republic of Ireland many businesses will accept both currencies and it is not necessarily a problem if you find yourself short of the correct cash.

However, especially in smaller villages, this will not be the case and it is worth making sure you have some local currency with you.

Many larger shops in Northern Ireland will accept Euros but it is essential to check this first and bear in mind that the rate may not be as favourable as it would be if you were paying in pound sterling.

Visitors from North America and Outside the EU Zone

Some American banks have high foreign transaction fees. This is also going to be true for any non-euro bank accounts.

This will be a percentage of the amount spent or withdrawn from an ATM and it can really add up.

So check the fees with your bank before travelling and if necessary get a different card that offers no fees on foreign transactions.

We have a really good guide on credit and debit cards, ATM fees, foreign exchange and other useful info about spending money in the Emerald Isle as a visitor.

Make sure to read it if you are planning a vacation, especially if you are thinking of using American Express in Ireland.

Like Scotland and the Isle of Man, Ireland is one of the few places in the world where banks can issue their own notes.

Most of the sterling notes that you see in Northern Ireland are issued by the Bank of England and are exactly the same as those elsewhere in the UK.

However, banks can issue their own versions with whatever they like on (within reason!) and not all notes in each denomination that you will come across in Northern Ireland will look the same.

These unique notes are what is known as commonly accepted and you shouldn’t have any problem spending them.

Just ensure that you change them for standard sterling before you leave Northern Ireland, as many places in the rest of the UK will not accept them.

Travellers cheques used to be a popular form of safe currency that could be used when travelling to Ireland and other international destinations.

However, they are now very rarely accepted anywhere except in airports and currency exchanges, where they will be changed for local currency.

This is safer than carrying a large amount of cash with you so it still has its place.

The use of Cheques have also dwindled in popularity and many shops and restaurants will no longer accept these, due in part to the charges levied for cashing them.

Bank cards are welcome in most destinations, with Visa and MasterCard being the most commonly accepted. With the exception of some larger hotels, many businesses will not accept American Express or Diners Club cards.

Using cards is a safe way to pay in Ireland and provides a handy way to keep track of your expenses, whether you are being billed in Euro or Pounds Sterling.

If you are travelling to Ireland from outside the Eurozone, then make sure you are not billed in your home currency – this ‘dynamic currency conversion’ can offer a very poor exchange rate.

Cards can also be used to withdraw cash from ATMs (automated teller machines).

These can be found in most towns but it is worth bearing in mind that smaller villages may not have one.

If you are visiting some of Ireland’s more rural areas, you will need to have some cash with you. You should also remember that using cards to withdraw cash may incur a small fee.

Many places will accept debit cards and credit cards as a safe and easy way to pay.

Saying that, always carry some cash with you, especially if you are visiting some of Ireland’s more rural beauty spots. 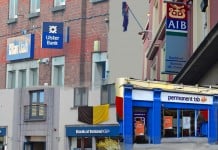