Set in a wonderfully picturesque setting next to the King’s River, in the heart of the lush County Kilkenny, Kells Priory is without doubt one of the best and largest examples of a surviving Augustinian priory in all Ireland.

It is a superb example of a monastery with added fortification and combines the classic religious architectural design of its age with a number of military flourishes.

A Visit from the Bishop of Ossary

Perhaps the most extraordinary episode associated with the priory was when the Bishop of Ossary, Richard de Ledrede, visited the establishment during Lent in 1324.

He was an English Franciscan who had been given his Irish diocese by Pope John XXII seven years earlier.

It seems the Bishop had become embroiled in a complicated family vendetta that conveniently enabled his own burning desire to prosecute those he regarded as heretics.

Just down the road in Kilkenny, a rich and very beautiful woman by the name of Alice Kyteler stood accused of witchcraft.

Her accusers were the children of her third husband (she was married four times in total, and her first three husbands all died in somewhat mysterious circumstances).

Alice’s son from her first marriage, William Outlaw, faced similar charges. They were ordered to appear before Bishop de Ledrede.

However, Alice had the support of Roger Outlaw, the Chancellor of Ireland (to whom she was related through her first husband), while her son appealed to Arnold le Poer, the Lord of Kells (Alice’s last husband was a le Poer).

Arnold le Poer summarily arrested Richard de Ledrede, ordering him to be held for seventeen days in the dungeons in Kilkenny Castle, by which time the date set for the ecclesiastical court hearing would have passed.

What had started as a trial for heresy morphed into a struggle for supremacy between religious authority and secular power.

In this case, the secular side was victorious.

Alice Kyteler absconded to England, while William, though he confessed to the charges, was let off very lightly with a simple penance.

However, things ended very badly indeed for Alice’s poor maidservant Petronella de Meath, who was accused in her mistress’s place.

She was condemned to be first flogged through the streets and then burnt to death at the stake.

Petronella was the first woman in Irish history to be put to death for witchcraft.

Today, it seems incongruous that this contemplative place, set so peacefully by the King’s River, was once associated with such dark times.

Comparable to the Franciscans who went before them, Augustinian friars were the driving force behind the construction of the most impressive medieval priories still standing in Ireland today.

It is thought that they first arrived on Irish shores, in Dublin, at some point c.1280, and by 1300 they had spread to several locations across the country.

The Priory sits on a three-acre site.

It was founded by Geoffrey FitzRobert in 1193 on land where he had built a church ten years previously.

FitzRobert was an Anglo-Norman knight who married twice – first to Basilia de Clare, the sister of Richard de Clare (Strongbow), and latterly to the widow of the First Lord of Offaly, Eve de Bermingham.

He became Baron of Kells in c. 1204. Among other sentiments, he declared that he had established the priory ‘for the salvation of my own soul and the souls of my predecessor and successors’.

The first friars to live and work at Kells hailed from Bodmin Priory in Cornwall.

Kells Priory may also be referred to as ‘Seven Castles‘.

This is due to the fact that the tower houses located around its external wall lend it a rather fortress-like air.

It is believed that the towers were built at some point during the fifteenth century.

This was rather a case of shutting the stable door after the horse has bolted, as it was far earlier in its long history that the Priory had been forced to endure sustained attacks on three separate occasions.

However, the Priory remained a viable entity until March 1540, when the site was surrendered to the 9th Earl of Ormonde, James Butler.

In times past, the priory would have been dominated by the church that opened directly from the central cloister.

This church was designed in simple cruciform style, though it was greatly extended over the centuries, including the addition of a second enclosure.

Today, though, the 15th-century tower set to the east, which has been re-roofed and reconstructed fairly extensively, is the most commanding and highest structure on the site.

On higher ground to the south there is a sizeable five-towered enclosure named ‘Burgess Court’ – also dating from the 15th century.

This may have been built as a response to the growing disorder in the area at that time.

Though it was once posited that this area may have housed a lay settlement during medieval times, no evidence has been found to support this theory.

In reality, it was probably used as a place where both people and livestock could be placed out of the way of danger.

In 1972, the archaeologist Tom Fanning started to excavate the Augustinian Kells Priory, set by the King’s River.

The site is synonymous in the minds of many with the trial of Alice Kyteler and the ultimately fruitless intervention of Bishop Ledrede.

Following Tom Fanning’s death in 1993, the project was taken on by Miriam Clyne.

This excavation was one of the most comprehensive ever attempted at a monastic dwelling in Ireland.

The dig resulted in around twenty thousand superb finds, including pottery (some of which was Ham Green), ridge and floor tiles and numerous metal pieces.

Also uncovered were a large number of stained glass window fragments, a find that allowed experts to reconstruct the probable original appearance of the window patterns.

From Kilkenny, take the Dublin road south-east towards O’Loughlin Rd.

Go over two roundabouts, then take the N10 for approximately ten kilometres to the R713.

Stay on the R713 for around seven kilometres, then follow signs to Kells Priory.

Park by Hutchinson’s Mill on the King’s River, and then simply follow the walkway down to the main site. 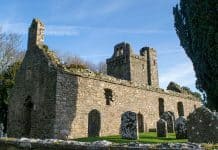